I'm the mod of a newly minted community on LJ for Breaking Bad fans, specifically devoted to the eternally unlucky, endearingly dumb, exceptionally sweet Jesse Pinkman. The fandom doesn't seem to have had much presence on LJ (at least not in a while), and fic seems a bit thin on the ground. So if you've been wanting a particular story, if you've been looking for a place to post your own work, if you've got prompts and plot bunnies bouncing around in your head with nowhere to go, come to

What did everyone think? I've had about two minutes to process and I'm still in that kind of immediate afterglow of having these characters back in my life. I might need a few more minutes before I can put together a proper review! Post your thoughts/flail/incoherent RAMBLE in the comments! If you write reviews at your own journals, feel free to link them in the comments also. Would everyone please put their hands together forrrrrrr...

And then go and check out the beautiful new banner that has been created especially for us to more clearly depict the new direction of this joint Breaking Bad/Better Call Saul community (and the art community also,

As I'm your friendly Australian mod, I can't actually WATCH THIS FREAKING PROMO MYSELF...! ARGH! It appears to be geo-locked (which infuriates me to NO END but is a story for another time and place), but I'm going to post the link here anyway and hope that a non-geo-locked one comes available super soon! If anyone stumbles across one, please feel free to post it to the comments, or point me in its direction so I can add it to this post.

Here is the link to the new promo at AMC's official page: http://blogs.amctv.com/movie-blog/2014/09/video-new-better-call-saul-sneak-peek-clip-amen/

After a couple of community members expressed interest in the idea, myself and your other friendly mod,

htbthomas, have decided to throw the Breaking Bad doors open to related ventures. Obviously the first (and hopefully not only!) of these is the soon to debut spin-off, Better Call Saul.

breaking_bad will be the place for all news articles, information, episode discussions, photos, casting, spoilers (behind cuts!), and so on.

breakingbad_art will be the place for all fics, videos, art, icons, graphics, gifs, etc.

So things will remain exactly as they are, only you'll also be seeing (and posting, hopefully!) content related to Better Call Saul.

If anyone has any questions, please leave me a reply in the comments and I'll get back to you ASAP.

Also, we're looking to update the community headers, so if anyone out there has any graphic skills they feel like putting to good use, we'd love a couple of banners (one for each comm.) that reflect our new, expanded focus. Please let me know (also in the comments below) if you think this is something you could help out with.

Thank you all very much, especially to those of you who have expressed enthusiasm for the inclusion of the spin-off and the continuation of these communities. You're all awesome. The end :)


"The 2014 Emmys: When a five-time winner beating a movie star is the biggest upset of the night." So wrote Grantland's Andy Greenwald on Twitter, referring to Bryan Cranston's victory over Matthew McConaughey for best lead actor in a drama. Famous guy beats ultra-famous guy: an outcome that's not exactly, to use a term often applied to both Breaking Bad and True Detective, mindblowing.

But there was something a little mindblowing to the mere fact that any suspense surrounded Breaking Bad's nominations heading into Monday's ceremonies. A little less than a year ago, pop culture seemed to unite in awe for a few weeks as AMC's show completed its final half-season. Barguments were had over whether it was the greatest show of all time; the notion of anything else seriously challenging it in the awards year to come seemed faint. 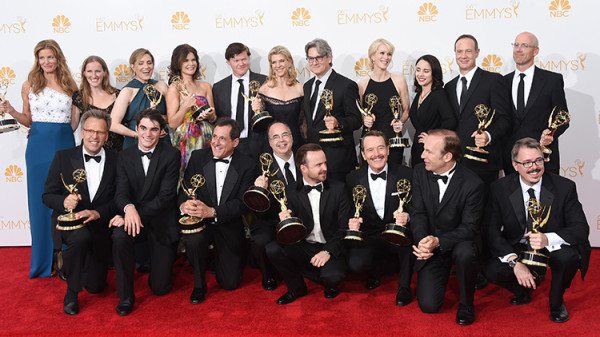 It was, by many measures, an experiment: one sole writer and one sole director handling a self-contained run of eight episodes. But in retrospect, it was also a pretty sure bet: two hugely magnetic movie stars, financial support and knowhow from the prestige-TV heavyweight HBO, and the most tested dramatic genre there is—cops. (Last night, Seth Meyers noted that the last time the Emmys happened on a Monday, 1976, every nominee for best drama was about police.)

True Detective quickly did exactly what HBO needs its shows to do, draw buzz. Four episodes in, and Christopher Orr here at The Atlantic wondered whether it was the best thing on TV. He wasn't alone, and for good reason. True Detective was extremely well made, boasting indelible characters, a hint of mystery, and cinematic flair previously unseen in the medium.

At this year's Emmys, it was clear that the show had shaken up the TV world a little bit. Jimmy Kimmel went on an extended joking-but-was-he-really tirade against Matthew McConaughey, saying that he's too good-looking for TV, that we were tired of his speeches, that he was, in essence, crashing the party and expecting to be rewarded.

Replace McConaughey's name with the show he represented—and cut the weed references—and the substance of Kimmel's rant would have still made sense. True Detective had arrived fully formed and built to win awards, bringing Oscar-level talent, a presumption of significance, and a hunger that no show ever had. Its impact was blockbuster-like. Even the memory of its underwhelming finale has faded, replaced by deafening casting speculation not unlike that which usually surrounds, say, an upcoming Marvel-movie installment.

Breaking Bad, on the other hand, was a distinctly TV-ish story of success in increments. It started small and obscure, a gamble from a network trying to prove itself, featuring TV character actors and TV writers-room deputies, forced to make TV-budget compromises as it fought, season after season, a sense of toiling in obscurity. When it blew up, it was in part because of evangelism from viewers who'd lived with the Whites and their associates for so long, watching characters evolve and make hard choices. Movies don't do that—they make one concentrated bid for your consciousness instead of slowly carving out a space.

The disappointment of True Detective's finale has been replaced by casting hype like that which usually surrounds, say, Marvel movies.
You could see the payoff to the Breaking Bad style of storytelling in the acceptance speeches from its team (it won best drama, lead actor, lead actress, supporting actor, and writing for the episode "Ozymandias"). Cranston, Anna Gunn, and Aaron Paul all accepted their acting trophies with a teary grin, talking about the "intimate" environment that had developed on set, the steady and gentle hand of show creator Vince Gilligan, and the love—yes, love, invoked multiple times by multiple actors—between all involved.

Writer-producers Vince Gilligan and Peter Gould took questions from reporters at the Television Critics Association’s press tour in Beverly Hills on Friday. Here’s what we learned:

The series regulars and their confirmed character names joining Bob Odenkirk: Jonathan Banks as Mike Erhmantraut, Michael McKean as Chuck, Rhea Seehorn as Kim, Patrick Fabian as Hamlin and Michael Mando as Nacho.
Better Call Saul is set in 2002 — six years before Saul meets Walter White in Breaking Bad. Funny enough, that the events in Breaking Bad started in 2008 is also new information, Gilligan said, noting that the original show never specified what year it took place. “I hesitate to say it, but it is indeed a period piece,” Gilligan said.
Yet the show will definitely jump around in time, as has been widely reported. “I think the best way to answer this and not get yelled at is you saw from Breaking Bad that we like non-linear storytelling and jumping around in time,” Gilligan said. “I would point you in the that direction, that anything that’s possible in Breaking Bad is possible in Better Call Saul.”
Saul Goodman’s name in Better Call Saul is not yet Saul Goodman. When we meet Odenkirk’s character, he’s actually known as Jimmy McGill, a small-time lawyer hustling to make ends meet and working with Mike. The series will track Jimmy’s transformation into Saul Goodman.
McKean plays Goodman’s brother. “So we have these two comedy legends working together,” Gould noted.
The show will not copy Breaking Bad’s neo-Western visual style. “Peter came with an idea book of frame grabs from classic movies, like The Conformist, we talked a lot about Kubrick,” Gilligan said. “We’re doing our damndest to make it as different as possible. It’s important that this not look like a carbon copy of Breaking Bad.”
Walter White will only show up if it makes sense: “If it makes sense we’ll do it, if it doesn’t make sense we won’t,” Gilligan said. “I’d love to have him as a director … character wise, who knows? Maybe there’s a way to do it.”
There’s a chance fan-favorite villain Gus Fring (Giancarlo Esposito) could return: “There’s always a chance, yeah,” Gilligan said. Added Gould: “… there’s so much to be said about Gus — although in the series it always seemed to me that Saul didn’t know Gus directly. He knew a guy who knew a guy.”
The reason Better Call Saul was pushed from fall to early 2015: “I am slow as mud as a TV writer,” Gilligan said. “We had a pace on Breaking Bad thanks to AMC that was deliciously stately … we have a way of doing things that’s slower than most tv shows … because we want to think everything through and we think that pays dividends.”
Some Breaking Bad directors are returning: After Gilligan’s premiere, Michelle MacLaren (Game of Thrones) will direct episode 2, Terry McDonough (who directed the first Saul episode of BrBa) directs episode 3 and Colin Bucksey (four episodes of Breaking Bad) helms episode four and Adam Bernstein (Fargo) has episode 5.
Better Call Saul is set to premiere in early 2015. As previously announced, Gilligan directed the first episode of the first season, which will consist of 10 epiosdes. The second season will consist of 13 episodes.
source and pictures
Recently Bryan Cranston ruled out a Walter White return on Better Call Saul but he'd like to direct an episode.
You can watch here the first teaser.

The prequel to Breaking Bad, Better Call Saul is expected to shoot in Albuquerque and the New Mexico extras and background Casting Company is now casting for the show’s extras.

If you would like to be considered for the part send in a current photo of yourself. Keep in mind the photo must be in color and must contain the following information:

Include your availability, your name, contact information, height, weight, age, the city you live in as well as the make, model, year and color of your vehicles.

Send the above information to extras@whiteturtlecasting.com.

Aaron Paul is about to be interviewed on CBC Radio. Unfortunately licencing means that non-Canadians can't listen to CBC Radio online during the Olympics, but they keep recordings of the interviews on their website. The program is Q with Jian Ghomeshi.
Collapse